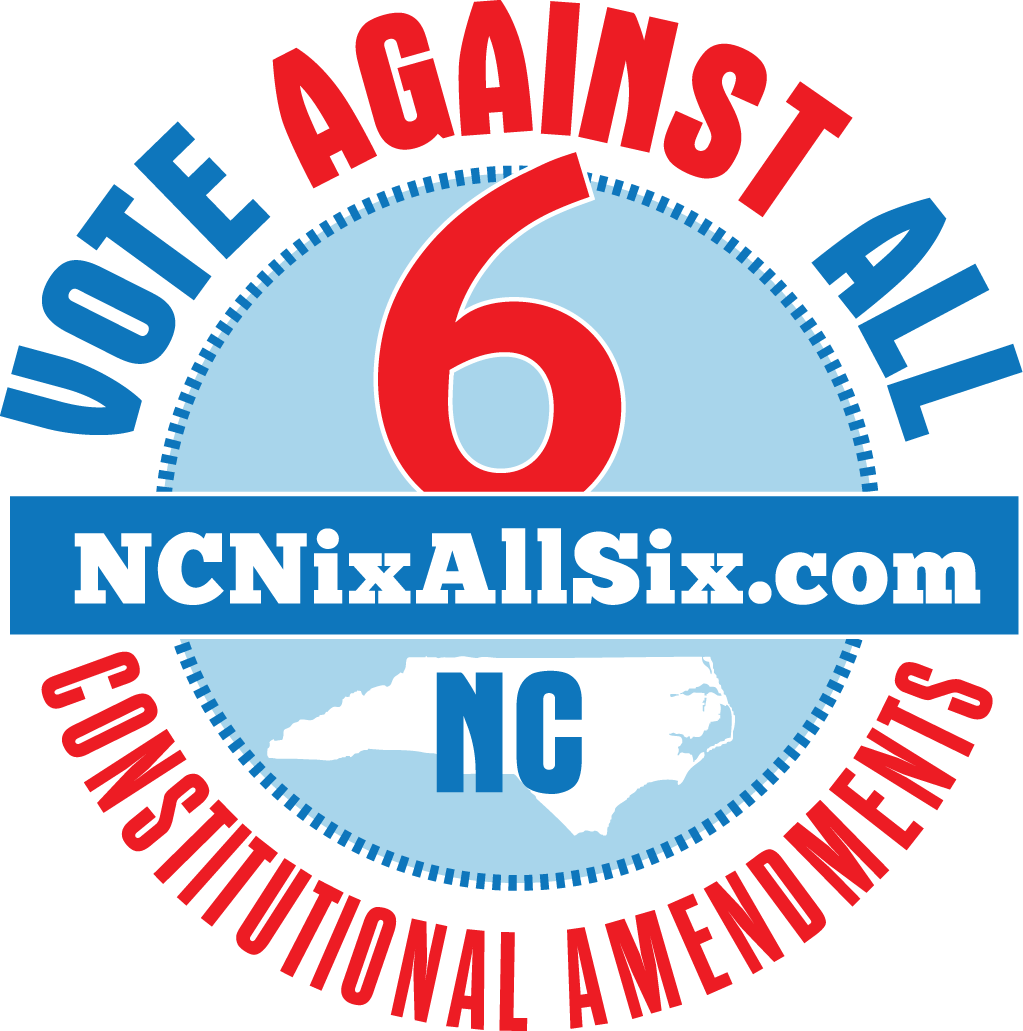 Ballot language: Constitutional amendment to strengthen protections for victims of crime; to establish certain absolute basic rights for victims; and to ensure the enforcement of these rights.

- This would be an underfunded/unfunded mandate.

- The law is too broad and risks unintended consequences, possibly compromising a victim’s right to privacy and the accused’s right to a speedy trial.

- It makes fundamental changes to the criminal justice system by eliminating the current distinction between adult and juvenile offences.

- Victim’s advocates in states that have voted on Marsy’s Law opposed it, as does the NC ACLU.

Voters will be asked to vote on six amendments to the North Carolina Constitution in November. They are all unnecessary, unprecedented, and politically motivated. We need to nix all six. It’s unclear who will write the final ballot language but the current language is “Constitutional amendment to strengthen protections for victims of crime; to establish certain absolute basic rights for victims; and to ensure the enforcement of these rights.”

The amendment originated as House Bill 551 and is part of a national effort, sponsored by Marsy’s Law for All, to enact similar amendments in other states. Marsy’s Law takes its name from Marcella “Marsy” Nicholas, a California college student who was murdered by her ex-boyfriend in 1983. Marsy’s Law for All is the national organization founded by Henry Nicholas, Marsy’s brother and the co-founder of Broadcom Corp., who has spent some $27 million to pass similar constitutional amendments to increase the rights of victims. His ultimate goal: a victims amendment to the U.S. Constitution. “The whole idea that someone who has a lot of money can come into a state and heavily influence what our laws are is concerning,” said Peg Dorer, director of the NC Conference of District Attorneys.

Regardless of its origins, this amendment is unnecessary and would lead to numerous unintended consequences. Victim’s rights are already protected in the North Carolina Constitution, Article 1, Section 37, which details the rights of crime victims “as prescribed by law.” House Bill 551 removes “as prescribed by law,” so it is unclear how these rights would be afforded to victims and how the amendment might impact the rights of defendants and the operations of the courts. Some have suggested that that the amendment removes the flexibility and discretion of the legislature and the courts in criminal proceedings, creating significant delays and interfering with the rights of defendants to a speedy trial and effective legal counsel.

House Bill 551 also revises the current North Carolina Constitution to include victims of both crime and “delinquent acts.” The effect is to erase the current distinction between adult and juvenile offenses. The North Carolina Branch of the ACLU opposes the amendment, in part, because “we fear this will result in more pressure on the judicial system to pursue punitive outcomes in juvenile cases and undermine the current system’s focus on rehabilitation.”

Other critics, including Democratic Rep. Marcia Morey, a former prosecutor and District Court judge, believes the money being spent to pass Marsy’s Laws could be better spent helping victims get to court, make up for lost wages, and get needed counseling. Victim’s rights advocates in states that have also voted on Marsy’s Law oppose it because adequate funding for systems and services and better enforcement of existing victims’ rights laws can more effectively serve survivors.

Our legal system manages rights between individuals through statute, not by means of the North Carolina Constitution. Mark Rabil, a Wake Forest University law professor and director of the school’s Innocence and Justice Clinic, is concerned that “Nobody’s really thinking about the change that [the amendment] fundamentally makes to the criminal justice system in the United States.” That system is based on two parties: the government and the accused, the prosecution and the defense. By essentially making victims a third party, the state runs the risk of complicating the process even more and possibly tilting the system against defendants. “I believe we have the best system of justice in the world,” Rabil added. “If we make victims a party, it’s going to turn into a three-ring circus.”

Barry Pollack, president of the National Association of Criminal Defense Lawyers agrees: “It really turns the presumption of innocence upside down by designating someone as a victim . . . before it’s been established that the defendant has committed any crime.” Most Marsy’s Laws, he said, “give rights to ‘victims’ before there has been any conclusion about whether the accused has committed a crime.”

A completely different worry recently emerged recently on the BlueNC blog, run by former Democratic gubernatorial candidate James Protzman. If the amendment passes, Protzman warns, “Victim’s rights will be extended to any class of people the legislature wants, including fetuses. This amendment will pave the way for making abortion illegal under North Carolina’s constitution.”

Former Supreme Court Chief Justice Burley Mitchell also opposes the amendment. “The constitution . . . is supposed to set broad general policies and aspirations,” Mitchell said. “It’s not to get down into the nitty gritty refinements of all public policy.” Mary’s Law makes sweeping promises the state can’t keep, claims to fix problems that constitutions can’t solve, and harms our justice system.